What the Helium Network Means for the Future of Connected Signage

What the Helium Network Means for the Future of Connected Signage

The growth of cryptocurrency and blockchain have made a lot of things possible that we couldn’t imagine even a decade ago in the digital signage world, and the tech industry as a whole. In past blogs, we’ve covered how the NFT market has opened up new possibilities for digital signage displays like NFT museums, and how restaurants that accept cryptocurrencies like Bitcoin are creating new demands for restaurant kiosk signage. Similarly, the Helium network is another offshoot from the blockchain space that could revolutionize how connected signage operates. In this blog, we’re discussing how Helium is becoming a digital asset to businesses because it allows you to reduce capital expenses associated with kiosks and other digital signage, all while expanding wireless network possibilities.

What is the Helium Network?

The short definition is this: Helium is an open-source blockchain network of global internet hotspots. To fully understand the scope and purpose behind Helium, let us provide a bit of background information.

In 2019, CEO and founder Amir Haleem officially launched Helium with the purpose of powering Internet of Things (IoT) devices, which includes any hardware connected to the internet. You’ve probably used IoT devices on many occasions, as most smart home gadgets are considered IoT devices, like the Amazon Echo voice assistant. These home devices that transmit data to and from the internet are becoming more common than ever in the typical household. Devices that have a wireless internet connection allow more security and versatility, which is why they’ve become the standard.

With the widespread use of IoT devices in homes and other spaces, Helium has recognized the need for an alternative to traditional wireless networks. In response, Helium’s solution is to provide a decentralized wireless network (including a 5G network) where hotspots can be hosted by anyone. All of this is made possible because of cryptocurrency (Crypto Decentralized Network).

How the Helium Network Works 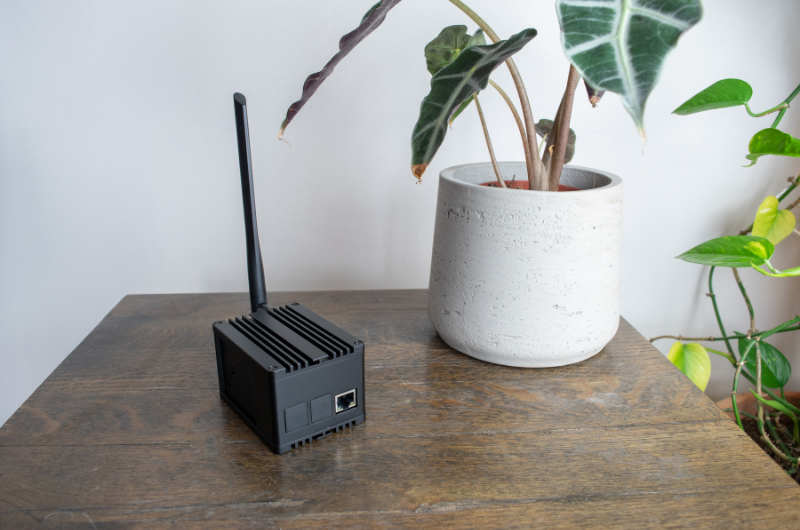 To set up a hotspot, you use a Helium-approved plug-and-play wireless device with an antenna and connectivity. The hotspot can reach about 200 times farther than traditional Wi-Fi and has been dubbed “Helium LongFi”. To support this long-range connection, Helium uses a combination of LoRaWAN (a Low Power, Wide Area networking protocol designed for IoT devices) and the Helium blockchain.

Looking at the big picture, it only takes between 50 and 100 hotspots to provide an efficient ecosystem of wireless coverage for a whole city. Hotspot owners are not just providing a network for their own use, but for people in their area as well. Last year Helium managed to set up over 88,000 new hotspots across 8,000 cities across the world. This is a major departure from the traditional model where every household pays for their own wireless network. This is why Helium has earned the name “the people’s network.”

Another important component of how the Helium network works is its algorithm called “Proof of Coverage”. PoC serves as Helium’s system to verify where the hotspots are and that they’re actually providing the network coverage that their owners claim they are. This enables a completely transparent operation between Helium, its hotspot owners, and the network users. It ensures that nobody is taking advantage of being a hotspot owner to earn HNT (which we’ll cover shortly) and that they’re actually providing wireless coverage to local users. The network also provides a database called Helium Explorer, where anyone can research and visualize Helium hotspots all over the world.

This decentralized model opens the floodgates for so many varying use cases, such as trackable dog collars, home security systems, and yes, connected digital signage.

Why are People Using the Helium Network Instead of Traditional Wireless Models?

Why would somebody switch from the wireless network they’ve been using for years to Helium? Getting involved in the world of crypto and blockchain may sound like a big ask all for a cheaper internet bill, but there are a few major incentives for people to use the Helium network, including:

Hotspot owners essentially form a partnership with Helium in a joint effort to provide wireless coverage, but the benefits are more than that. The reason why the Helium network is supported by its own blockchain is due to the crypto incentive to become a hotspot owner. The Helium Blockchain has its own crypto currency called an HNT, which can be mined and distributed to Helium hotspot owners when they provide wireless coverage.

The hotspot device that provides wireless connectivity also doubles as a Helium miner, making it easy for owners to earn HNT for building the network and transferring data. Essentially, being a hotspot owner holds a lot of value that goes beyond just setting up a wireless connection.

2. Cheaper than the traditional models

Setting up a wireless network through Helium is a fraction of the cost of traditional network models. The combination of network installation costs and monthly bills is often a major strain on a household’s finances or a business’ budget constraints. And as inflation continues to skyrocket, internet bills will continue to climb.

In addition, as access to a reliable network connection becomes increasingly attached to work, school, and general livelihood, internet providers will continue to raise prices because they know it has become a necessity for everyone in the modern world. The concept of decentralized models like Helium looks to provide a usable alternative to these rising costs.

3. Autonomy over your wireless connection

Helium is known as “the people’s network” and this name is no exaggeration. The Helium network provides a decentralized business model for hosting wireless networks, instead of relying on the pricing and quality controlled by other companies. That means that users don’t have to be subject to the ever-growing fees they charge for a wireless connection.

Especially in a day and age when having connected devices and access to the internet is becoming more integral to daily life, a people’s network is more necessary than ever. Access to a stable network is a part of people’s livelihoods, which is why the issue of wireless connections has become a newly developing social justice issue. With Helium providing an affordable network that’s in the hands of the people, it might just be the solution needed to provide equitable internet access.

As a digital signage company that has been in this industry for over two decades, we’ve seen the rapid acceleration of technology. Throughout that experience, we’ve learned it’s increasingly important to be ready for the next big tech innovation that will revolutionize the industry. As such, we’ve kept a close eye on the world of cryptocurrency and what it might mean for our industry. As we continue to learn and grow, we’ve identified a distinct possibility that Helium may be the next solution for businesses using digital signage.

As we all know, the signage of today functions as much more than traditional signs did in years past. They function as entertainment, customer service tools, and display constantly shifting content to meet the demands of modern messaging. Many businesses today have several signage installations, all connected through the internet.

Due to the growing demand for more content marketing, businesses are paying massive internet bills to support their network connection. Considering the numerous advantages associated with the Helium Network, it’s clear that Helium would be a major improvement for business owners using digital signage.

What Would Helium Do for Businesses?

What are the possibilities for digital signage when the Helium network comes into play? A beneficial outcome for everyone would be for businesses to become either hotspot owners or users of a local Helium network. Businesses would be able to connect any digital signage technology (this could include restaurant menu boards, kiosks, wayfinding signs, readerboards, video walls, and even outdoor signage, etc.) to the Helium network. For example, if signage opportunities were made available on the Helium network and coupled with media exchange networks, then a whole set of new messaging opportunities may be available. For example, imagine a signage installation where any individual or organization with a Helium connected device could display their content. The possibilities are vast and exciting!

Another advantage for businesses is that it creates a free service for the patrons in a general vicinity of the display. This allows the people to get rewarded with Helium just by using the network and the display becomes a miniature cell tower. It doesn’t pay as much as a traditional cell tower but you’re gaining more local data at the pedestrian level, and every interaction produces a passive income of the HNT token. It’s another form of revenue to reduce the ROI on typical digital kiosks.

Take the Next Steps

The digital signage industry is changing, and Keyser is learning and growing as well as new tech trends improve on those of the past. If you are interested in digital signage for your business and want to get started today, contact Keyser.

Will Workplace Digital Signage be the New Slack?